learn about our history

Our Fire Department responds to approximately two hundred sixty (260) calls annually in our service area, which includes emergency response coverage to the Town of Kouts and Pleasant Township in Porter County, Indiana. Our Fire Department’s membership is made up of twenty-four (24) Volunteer Firefighters.

Critical infrastructure considerations within our jurisdiction include several underground pipelines, two (2) township schools, a center for youth, and water treatment facilities for the Town of Kouts. Our Department is also a first due mutual aid Company to a major electric generation facility in a bordering jurisdiction.

Our Department prides itself with being one of the most aggressive, well-trained Fire Departments in our area. We identify with and strongly support the necessity of automatic aid and mutual aid, whether giving or receiving, and we are always willing to assist, whether it is a firefighting role, training, or other fire related activities.

We require all of our members to act in a courteous and professional manner at all requests for response and trainings.

We understand every emergency demands our complete attention. We are always ready and willing to respond when needed.

Training is a vital part of our continued ability to provide the best care and quickest response to our community and mutual aid response areas.

The fire service has changed over the years. Equipment and tools along with technology, has greatly increased our ability to help others.

One thing remains the same. The willingness to be there when we are called.

On April 25, 1921, the Kouts Town Board passed a Resolution for the purchase of a chemical engine from Obenchain-Bauer Company of Logansport, Indiana, for the sum $2,075. The local Ford Dealer, Cannon and Peters, was to supply the “self-starting” one ton truck chassis for $682. The unit was placed into service in May 1921.

The first fire fought with that piece of equipment was a residence fire on August 4, 1921. The residence belonged to Fred Heinold.

In December of 1922, the first Town Hall was purchased for $2,500. The following year, that same building was remodeled with a large door to accommodate the fire truck. 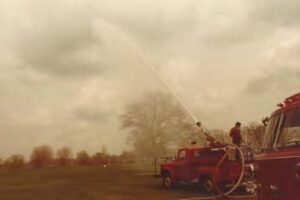 In May of 1925, the outside fire siren was ordered. That siren was tested at noon everyday since July of that year, a practice that continued until 1996.

In 1939 the municipal water system was installed.

The first pumper was ordered in 1947. It was purchased from American Fire Apparatus Company, and mounted on a White chassis. The pump was rated at 500 GPM and served the Department and the community for many years until being sold at auction.

A 1953 GMC truck was salvaged from a fire fitted with an old boiler tank from the Allis Chalmers factory in Laporte. The unit was then sent to Chicago where the W.S. Darley Co. fitted it with a pump and piping. The tank had a capacity of 1000 gallons. This gave the department the capability to effectively fight rural fires away from the city water supply.

In 1958 the second town hall was dedicated. It was built at a cost of $17,000. It serves as a meeting place not only for the Town Board but also other civic groups. The building also housed the fire department until 1985.

A new Dodge four wheel drive truck was purchased in 1959. It was outfitted with a tank and pump by members Harold Chael and Bob Claussen. The Fire Department used it to fight grass fires. It was the first of its kind, and soon other Departments followed the practice and added similar units to their fleets.

In January of 1965 a new American LaFrance pumper was purchased. The unit cost $23,000. Fire Chief Richard Chael, his brother Harold, John Rogowski, and George Maul went to Elmyra, New York to drive the new truck back to Kouts. The pump on the new engine was rated at 750 GPM, and it carried 500 gallons of water.

In 1973, a new Dodge van was converted into a Rescue Unit. It carried various extrication equipment, and spare air bottles, portable generator, and various other equipment. An old Army 6 X 6 was acquired from the Department of Forestry. It was outfitted with a 1,000 gallon tank and a small pump. It was operated until insurance regulations forced its retirement.

Through the Indiana Department of Forestry the department obtained an old Army 6 by 6. This truck was fitted with a 1000 gallon tank and a small gas engine driven pump. The department used the truck for several years until the insurance requirements imposed by the Forestry Department made it impractical to keep it.

In October of 1977 another new tanker was added to the fleet. It was a new 1975 GMC. This truck was fitted with a stainless steel tank which had originally been used to haul milk. It’s capacity was 2300 gallons. The department raised all the money for the purchase for the truck and tank. 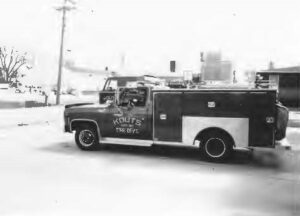 The “Jaws of Life” were purchased in October of 1979. The $8,600 used to purchase the equipment came from a Federal grant and Fire Department funds.

By this time, the Dodge van was becoming loaded past it’s rated capacity, so it was decided to purchase a larger truck which could better carry the load. In 1979 a new Chevrolet one ton truck was purchased. It was taken to Hoosier Fire Equipment Co. in Valparaiso to be fitted with a utility box, lights, and siren. The unit was placed in service on January 4, 1980.

A new 3 bay station was built in 1985, with the majority of the work being done by the members at that time.

A new rescue vehicle was placed into service on January 4, 1980. The Chevrolet chassis was outfitted by Hoosier Fire Equipment of Valparaiso.

Since the new pumper the department has placed into service another tanker. This truck was purchased used complete with a bed for hauling livestock. The livestock bed was removed and the chassis shortened to accommodate a stainless steel tank. The unit was then sent to Hoosier Fire Equipment Co. of Valparaiso to have a pump and piping mounted.

A forth bay was added to the existing station in 1989.

In 1989, the department purchased a new Chevrolet 4 wheel drive truck and outfitted it with a tank, pump, house reel, and miscellaneous tools to replace the previous Dodge brush truck.

An American Fire & Rescue/Kenworth Medium Duty Rescue Squad was placed into service in March of 2000, at which time the 1980 rescue was retired as the rescue and converted to the Light/Generator Truck.

In 2002, the department built another tanker, this time with a 3,400 gallon stainless steel tank on a 1993 Kenworth chassis. 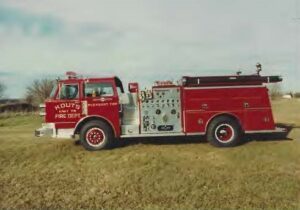 In 2003, the department purchased a new 2003 Chevrolet Tahoe and equipped it as an incident command vehicle for the fire chief to drive.

In 2008, the fire department purchased a used 2006 Chevrolet Trailblazer and equipped it as a 2nd incident command vehicle for the department assistant chief to drive.

In 2009, the fire department received a grant from Indiana Department of Natural Resources (DNR) to upgrade the skid unit and pump in the 1989 Chevrolet pickup. A new skid unit from Darley Manufacturing was purchased and placed in service.

In 2011, the fire department made it’s largest purchase to date. It was time to retire the 1981 American LaFrance pumper and the department elected to replace the engine with it’s first aerial device. The department purchased a 2010 Pierce Contender Quint from Pierce Manufacturing in Appleton, WI for a cost of $650,000. The Quint contains a 75’ aerial ladder, a 1500 GPM pump, 500 gallon water tank, 800’ of 5” supply line, over 1000’ of discharge hose, and 117’ of mixed use ground ladders.

In 2015, department personnel made significant upgrades to the 1989 Chevrolet Pickup. A new brush guard, new lighting, new tires, new rims, and updated suspension was installed on the truck.

In 2015, the fire department took the 3,400 gallon stainless steel tank off of the 1994 Kenworth and re-chassised it onto a brand new 2015 Kenworth chassis and installed a new pump and new lighting all around.

In 2016, the fire department purchased a 2016 Ford F-150 Crew Cab pickup truck and outfitted it as a new command vehicle. The 2003 Tahoe was passed down to the assistant chief and the 2006 trailblazer is now used as a utility vehicle from the fire station to fire and medical scenes.

In 2019, the fire department purchased a 2017 Chevrolet Silverado 1500 Crew Cab pickup truck and set it up as a new command vehicle to replace the 2003 Tahoe for the assistant chief.

In 2020, the department purchased a 2020 RAM 2500 Crew Cab pickup truck and outfitted it with an 8′ Western snow plow. The truck was set up as a replacement squad to the 2006 Trailblazer, which was retired and sold.